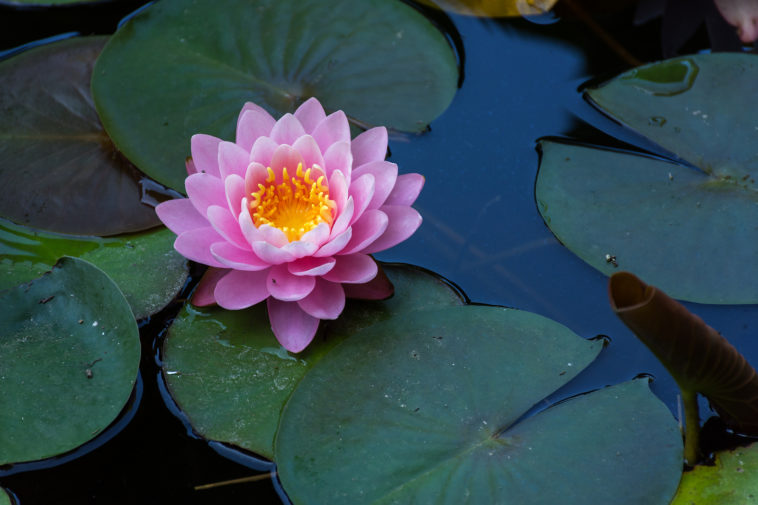 The water lily is a flowering plant that lives in water. Its roots implant at the bottom of quiet ponds and rivers, while its leaves and flowers float at the water’s surface. The water lily is a hardy plant. It can withstand a variety of habitats and conditions and grows around the world.

The water lily has a long stalk that grows underwater. It’s filled with tiny tubes. These tubes carry oxygen from the air above to the roots below.

The water lily has large disc-like leaves that lie flat atop the water. They are tough, leathery, and covered in a wax-like gloss. Water slides off them easily.

From the disc’s center, a water lily blooms solitary fragrant flowers. Unlike the plant’s leaves and stems that first develop beneath water and push their way to the surface, water lily flowers are borne above water. Each flower is shaped like a cup with a spiral design and many petals.

A water lily’s flower color depends on the species. Some can be white, or varying shades of pink, red, or orange. Some water lily species even have flowers that change color throughout the blooming process. These are called “changeables.”

A water lily flower has both male and female reproductive parts, but it does not self-pollinate. During the first day of its bloom, the flower opens with a fragrant liquid covering the stigma, the female reproductive part of the flower. The fragrance attracts insects carrying pollen from other lilies. When pollen carrying insects visit the flower, pollen drops onto the stigma and the fertilization process begins.

On its second and third days in bloom, pollen forms on the flower’s stamen, the male reproductive part. Pollen sticks to the legs of visiting insects, who fly away to fertilize the stigmas of other lilies.

On the fourth day, the water lily closes. Its stem draws the flower beneath the water for weeks. Inside, the flower grows a sponge-like berry that contains up to 2,000 seeds. When released, seeds float at the surface soaking in water until they’re heavy. Then they sink to the bottom of the pond where they implant and grow a new water lily. This seed dispersal process is called hydrochory.

There are nearly 60 different species of water lilies. All live in freshwater environments. All eventually flower. Almost all are perennial, meaning they live for two or more years. The scientific name for water lily is Nymphaeaceae. 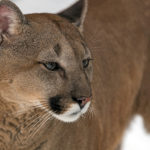 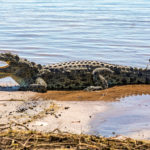