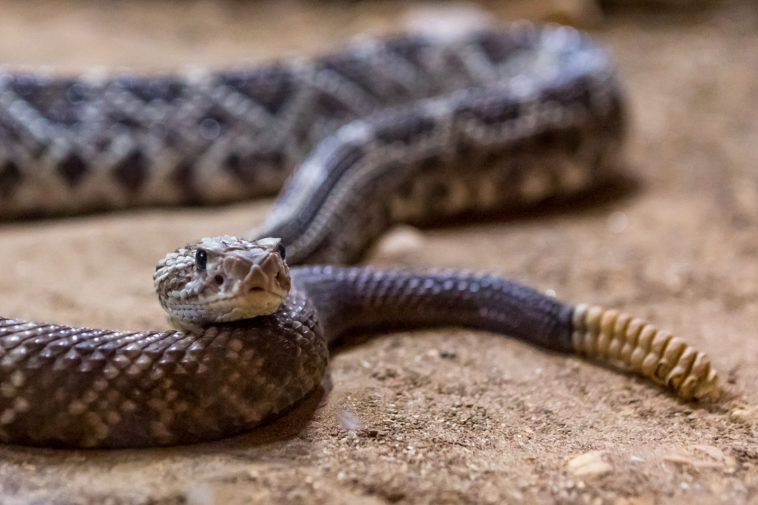 Rattlesnakes are easy to identify. They have dry, bare scales at the end of their tails. When a rattlesnake senses danger or wants to warn an approaching intruder, it shakes its tail and the loosely-linked hollow scales make a buzzing, rattling alarm sound.

The scales at the end of a rattlesnake’s tail are the remains of a tail left behind. Rattlesnakes shed their skin three or four times a year. The tail scales are not shed; these loosely connected segments remain. An adult rattlesnake may have as many as 16 segments or rattles. A rattlesnake can vibrate its tail up to 50 times a minute to warn or deter intruders.

Rattlesnakes are pit vipers. Pit vipers have a pair of heat-sensitive pits between their eyes and nostrils. These heat-sensitive pits are used to “see” nearby warm-blooded animals. They produce a “picture” of the nearby animal which allows the rattlesnake to hunt in complete darkness. The rattlesnake also has heat sensors in its mouth which further allow it to target its prey when it strikes.

Rattlesnakes have triangular-shaped heads with long fangs that fold up against the roof of the mouth. When a rattlesnake strikes it moves its fangs down from the roof of the mouth and opens its hinged jaw wide so that the fangs point forward toward the prey. Bags of poisonous venom are located on either side of the rattlesnake’s head. Muscles around the venom bags squeeze venom down after the fangs stab the victim. Rattlesnake venom destroys blood cells and causes prey to die of internal bleeding which can take several hours.

Unlike many other snakes, rattlesnakes do not lay eggs. They give birth to live young. A baby rattlesnake will have no rattles because it has never shed its skin, but its venom will still be strong enough to kill other animals.

There are more than 25 species of rattlesnakes. Most are found in the United States. The pygmy rattlesnake is just 20 inches (50 cm) long. The eastern diamondback rattlesnakes can grow to 8 feet (2.4 m) long. Most rattlesnakes live in dry, desert regions, but the copperhead rattlesnake is found in hillside forests and wetlands. 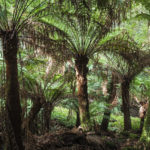 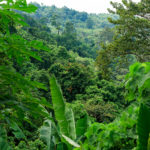