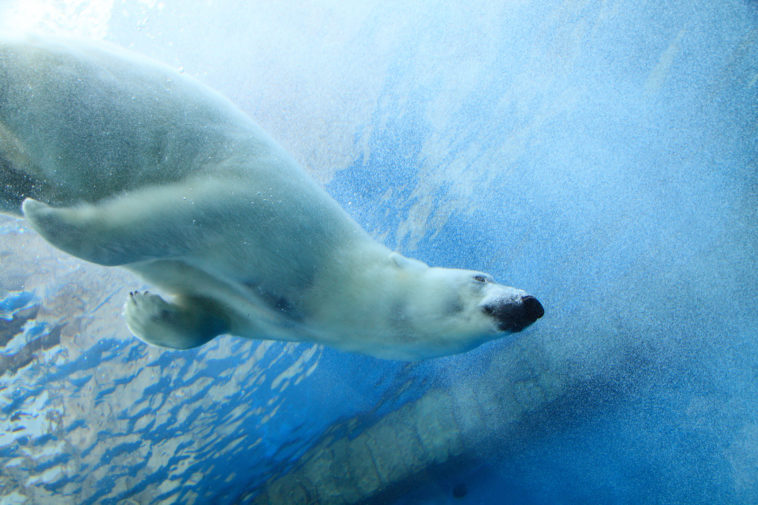 Polar bears are good swimmers. They use their massive forepaws as paddles and rear trailing legs as rudders. They can swim in open water at up to 6 miles per hour (10kph).

The polar bear’s creamy-colored outer fur–called guard fur–is hollow and air-filled. This aids in the polar bear’s buoyancy. It is a swimming machine. (The polar bear also has a dense underfur to protect it from cold.)

When a polar bear dives, its eyes remain open but its nostrils close; a polar bear can hold its breath for up to two minutes. That allows it to swim beneath its prey such as seabirds and seals and come up with great surprise.

Polar bears live in the Arctic and Northern Canada. They favor ice packs, shoreline, and open water where seals are found. In the summer they can move inland where their diet is birds’ eggs, lemmings, lichens, mosses, and carrion of caribou and musk-oxen.

Polar bears are one of the few mammals that can survive the harsh, freezing conditions of the Arctic. Polar bears have an insulating layer of fat, called blubber. The hollow hairs of its outter fur also conduct warming ultraviolet rays from the sun onto its black, heat-absorbing skin. 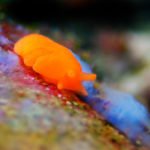 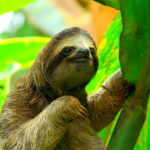