Opossums are scavengers. They will eat human food scraps and just about anything else they come across from eggs, flowers, fruits, and carrion. They will eat farm chickens and anything in the garden. They are true omnivores.

The Virginia opossum is the largest American marsupial. A marsupial is a mammal that bears live offspring that are in the very early stage of the embryo’s development. Marsupials nourish their newborns on milk rather than by a placenta. The near embryonic newborns make their way to one of the mother’s nipples where it remains attached for several weeks. Virginia opossum litters can include up to 21 newborns, but the mother has only 13 teats.

Virginia opossums can “play possum.” When threatened, they can feign death in an effort to make a predator lose interest. It can lay motionless for up to 6 hours with its mouth and eyes wide open. It will not respond to stimuli, including touch. And it can exude a foul-smelling fluid from its anus to add effect.

Virginia opossums can be found in the South Eastern and South Central United States and along the West Coast. It can also be found in the tropical forests of Mexico and Central America. 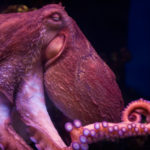 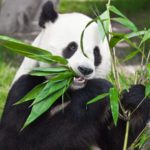