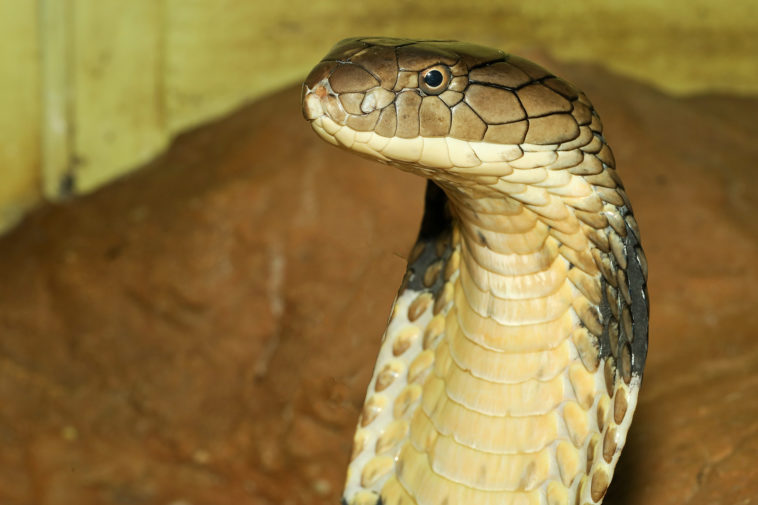 When threatened, the king cobra can raise the front third of its body off the ground and stand tall and erect. It will hiss and extend a hood around its neck to appear even more menacing. The king cobra will strike downward, but it rarely attempts to bite unless it means to kill.

The king cobra lives deep in the forests of India and Southeast Asia. It is a good swimmer and is often found near water. The king cobra does not like human contact. There are few recorded cases of king cobra bites on humans.

King cobras are slender and smooth-skinned. Adults are plain brown while juveniles are darker and marked with pale chevrons down their backs. Females lay between 20 and 40 eggs. Female king cobras are the only snakes known to build a nest for their eggs. The nest–usually made of dead vegetation–is guarded by both parents. King cobras can live up to 20 years.

The king cobra has excellent eyesight. It can see its prey moving as far as 328 feet (100m) away. It can also pick up the scent of its prey or feel vibrations in the ground if its prey is nearby. When the king cobra catches its prey and delivers the venom, it flexes its jaw wide open and swallows its prey whole, head first

The scientific name of the king cobra is Ophiophagus hannah. 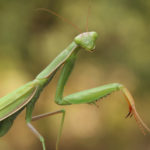 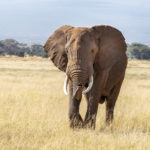