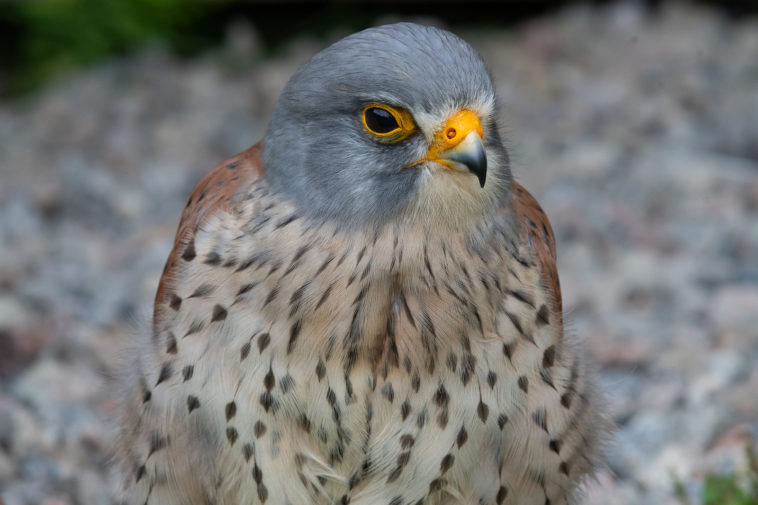 The kestrel is a medium-sized bird of prey that has mastered the art of hovering. Kestrels can seemingly remain motionless in the air as they search the ground below for prey. Kestrels are a member of the falcon bird family but they are smaller than falcons and other birds of prey.

Common kestrels are 13 to 15 inches (33-38 cm) long from head to tail. They have a wingspan of 26 to 32 inches (65-82 cm) and weigh less than half a pound (136 g). Their feathers are mainly light chestnut brown with blackish spots on the upperside and buff with narrow blackish streaks on the underside. Males have a blue-gray cap and tail.

Kestrels have extremely sharp eyesight for spotting their prey. They have narrow, pointed wings for fast flight and long tails for accurate steering and dives. Kestrels have strong, needle-sharp talons (claws) for seizing prey and carrying it away. Kestrels use their strong, sharp hooked bills to tear the meat of their prey apart.

Kestrels use a flight technique called “wind hovering” to remain motionless above the ground as they hunt for prey. Wind hovering involves flying into the wind at a speed equal to that of the wind. The wind lifts the kestrel’s wings allowing it to remain motionless for minutes. To maintain its hover, the kestrel will stretch its neck forward and extend its wings and fan its tail feathers as needed, and sometimes it will quickly flap its wings to increase air movement. The kestrel can do all this while its head remains motionless and its eyes remain fixed on the ground.

Kestrels hunt during the day. They hunt for voles and mice and other small mammals as well as small birds, reptiles, and insects. They commonly hover at 30 to 60 feet (10-20 m) above the ground searching for prey.

Kestrels are found around the world except for the polar regions. They are partial to open fields, heaths, shrubland, and marshland. Kestrels nest in tree hollows, rock and cliff ledges, and in abandoned nests of larger birds. A female kestrel will lay a clutch of one to seven eggs each spring.

Kestrels live for up to 16 years. The scientific name of the common kestrel is Falco tinnunculus.