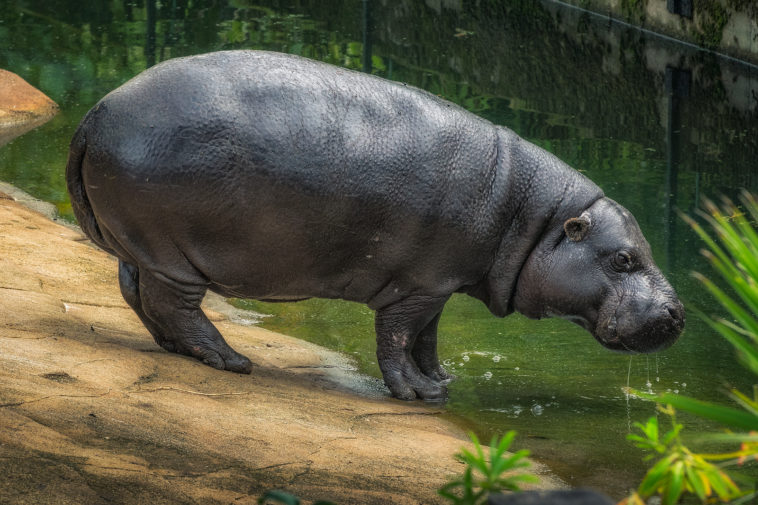 The common hippopotamus is always in or near water.
FacebookTweetPin

Hippopotamuses are massive animals with barrel-shaped bodies, stumpy legs, and huge, wide-opening mouths. The hippopotamus is the third-largest land mammal on Earth after the elephant and rhinoceros. Hippopotamuses are plant-eaters that spend their days submerged in rivers or lakes and then feed out of the water on grass at night. Hippopotamuses live in the wet parts of tropical central Africa.

Hippopotamuses have thick lips and large cheek teeth for cropping and chewing grass. Common hippos have large canine teeth called tusks that are used for fighting and protecting their territory. A common hippo’s eyes, ears, and nostrils are positioned high on its head. This allows the hippo to breathe and keep a lookout for danger as it stands or floats in water nearly submerged during the day. The hippopotamus has webbed feet that act like paddles for swimming underwater. In deep water, hippos can walk or run along the bottom. Their ears and nostrils close underwater; this allows them to stay submerged for up to five minutes at a time.

The density of a hippopotamus’s body is just slightly greater than the density of water. That allows the hippopotamus to sink slowly to the bottom. But the hippo can inflate its lungs when breathing at the surface so that it can stay afloat with little effort. The hippo has nearly hairless skin that dries out easily; that is why it stays in water most of the day. A hippo’s skin produces a pink, oily mucus that acts as a sunscreen and quickly heals wounds,

Hippopotamuses are social animals. They live in herds of 10 to 15 animals. At night they leave the water together and walk to grassy areas to feed. Hippos are easily startled. Despite their short legs, they can trot and will charge and kill animals that come too close or threaten their young. There are few predators large enough to threaten an adult hippo. Human hunters are their main threat.

Hippopotamuses are territorial. A dominant male will protect and mate with females in his territory. The female hippo usually has a single calf after a gestation of 240 days. Calves stay with their mothers for 10 to 12 months. 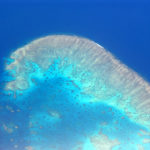 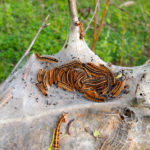