The great white shark is one of the largest and most powerful predatory fish on Earth. Some say it is a killing machine.

The great white shark–commonly called great white or white shark–has a powerful tapered body and crescent-shaped tail designed for fast swimming and sudden attack. A great white can weigh up to 5,000 pounds (2,268 kg) and can grow to nearly 20 feet ( 6 m) long. A great white can swim at 35 miles (56 km) per hour over short distances. It is so powerful it sometimes leaps out of the water when chasing its prey.

The great white has multiple rows of blade-like triangular teeth. It has a keen sense of smell and can detect tiny movements in the water. The great white can track its prey with great accuracy. It can hear the heartbeat of prey that are completely still.

Great white sharks are found in oceans throughout the world except for very cold polar waters. Large numbers of great whites are attracted to areas where there are sea mammal colonies such as off South Africa, Australia, and California.

Great white sharks can live as long as 70 years. The scientific name of the great white is Carcharadon carharias. 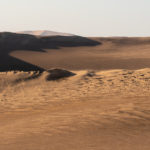 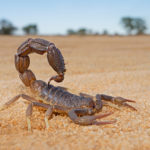