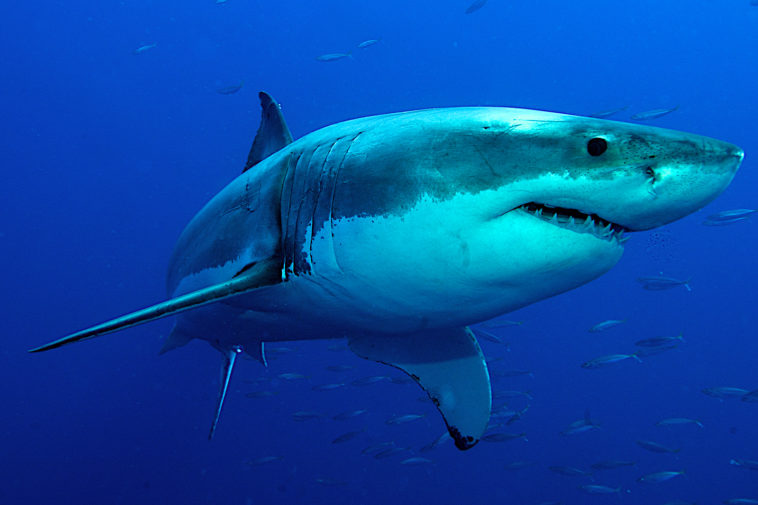 The great white shark is one of the most powerful and vicious predators in the ocean. Great white sharks eat seals, sea lions, elephant seals, porpoises, dolphins, tuna, sea turtles, seabirds such as gannets and penguins, squid, crustaceans, and the remains of dead whales. A great white shark can bite off 44 pounds (20 kg) of fat and flesh from the body of a dead whale in one bite. It consumes many of its prey whole.

Great white sharks are intimidating creatures. They can grow from 13 to 23 feet (4-7 m) long and weigh more than 3.7 tons (3.4 metric tons). The great white shark has a powerful, streamlined, torpedo-like body with a pointed head and conical snout. A great white shark can swim as fast as 25 miles an hour (40 km/h). In short bursts, a great white can swim as fast as 35 miles an hour (56 km/h) sometimes leaping out of the water. It has a tall triangular dorsal fin that helps it keep upright as it swims; it has long pectoral fins that act like wings to help it move forward; it has a crescent-shaped tail fin that is adapted for speed.

The great white shark has excellent vision and it has super-sensitive nostrils that pick up the scent of blood in the water up to 3 miles (5 km) away. A great white shark can smell a single drop of blood in 26 gallons (100L) of water. Sensory cells in the pores of its snout can detect the tiny electrical pulses generated by its prey’s nervous system. It has a sensitive “lateral line” that runs down each side of its body that can pick up faint vibrations in the water; this helps it track the movements of prey.

The great white’s coloring makes it hard to see and enables it to sneak up on prey. Great whites are dark blue-gray on top, a color that mirrors ocean depth. The belly of a great white is pale white which blends with down-welling light from above. Great white sharks usually lunge up from below delivering a lightning-fast blow or bite before pulling back. The great white renders its prey helpless in the initial attack then returns to shear off chunks of meat. The speed of a great white’s attack can often hurl it and its prey out of the water.

Great white sharks are found in temperate and tropical oceans worldwide. They can be found in tropical waters and cold waters, but not freezing water. Great whites are found at depths of 4,260 feet (1,300 m) and they are often spotted trolling for prey in shallow waters along coastal regions.

Great whites are usually solitary. They breed at about 10 to 12 years of age and produce live young after a gestation of about 12 months. Great white sharks live about 70 years. The scientific name of the great white shark is Carcharodon carcharias.