A portion of the Great Barrier Reef seen from space
FacebookTweetPin

The Great Barrier Reef is the largest coral reef in the world. It lies off the Pacific coast of tropical northeastern Australia stretching 1,430 miles (2,300 km) from about Brisbane to the Torres Strait between Australia and New Guinea.

The Great Barrier Reef is a vast complex assemblage of 3,000 separate coral reefs and 900 islands linked together in a chain of living coral rock. It gets its name because it acts as a barrier between the coast and the large waves of the Pacific Ocean. The reef is several miles offshore at the edge of Australia’s continental shelf. The water between the reef and the shore is relatively shallow; beyond the reef the ocean plunges to 3,280 feet (1,000 m) or more.

The organisms that created the reef consist of about 400 different types of hard corals. These organisms have been depositing the limestone that builds up the reef for thousands of years. Coral reefs are made up of many individual animals called polyps. A coral reef forms when a polyp attaches itself to a rock underwater. The polyp then divides again and again to form a colony. Some polyps secrete calcium carbonate which protects the polyp with a limestone exoskeleton. This exoskeleton is essentially a bionic rock. Coral reefs are massive bionic rocks. They are living structures. 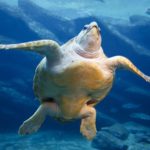