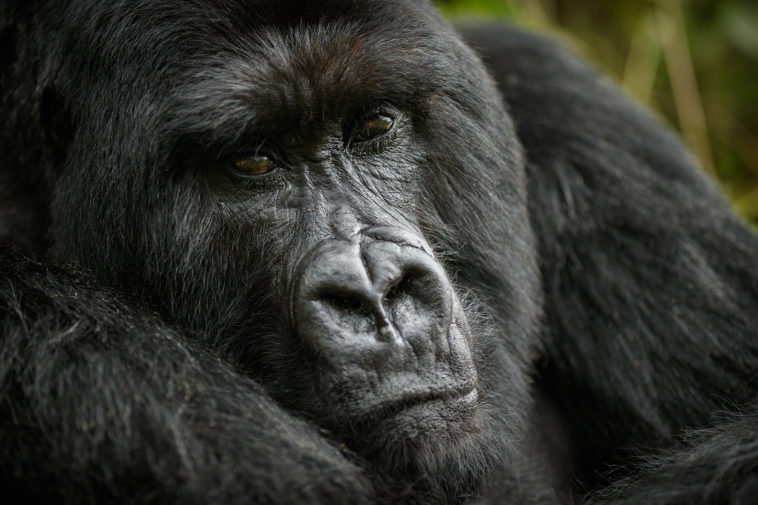 Gorillas are the largest primates. They are highly intelligent, peaceful, and almost entirely vegetarian.

Gorillas grow to 4 feet (1.2 m) tall and weigh as much as 460 pounds (210 kg). Gorillas feed on ripe fruit and plant shoots and leaves. Occasionally, gorillas eat ants and termites. Gorillas do not eat meat. Gorillas are active during the day. At night they bend tree branches to form sleeping nests. Despite their weight, gorillas can easily climb trees.

Gorillas have strong arms and broad chests. Gorillas have hands very much like human hands but stronger and a lot hairier. Gorillas have opposable thumbs and opposable big toes which means they can grip branches with both their hands and their feet. This allows them to easily climb trees to gather fruit.

Gorillas are covered with black fur except for black skin on their faces and palms and toes. Adult male gorillas develop silvery fur across their backs as they grow older. They are known as “silverbacks.” An adult male gorilla weighs twice as much as a female gorilla.

Gorillas live in small groups of 3 to 20 members. A typical gorilla family consists of a single adult male and usually 3 to 20 adult females and their offspring of various ages. Baby gorillas are born after 257 days in their mother’s womb. They cling to their mother for four months after birth and can go out on their own after 3 years. Gorillas become adults after 4 or 5 years. A male gorilla reaches full adult size after about 18 years. A gorilla family has a home range of 2,000 to 4,000 acres (800-1,800 hectares). One family’s home ranges may overlap with a neighboring family.

Gorillas communicate with facial expressions, body gestures, and sounds such as whimpers, grunts, rumbles of contentment, and alarm barks. When met with an attacker, a gorilla will stand upright, beat its chest, and hoot. When gorillas sense danger they usually retreat in a single file deep into the thick forest. 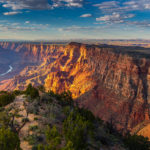 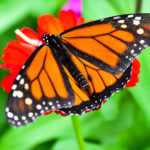