Giraffes live in woodlands and savannahs in Africa.
FacebookTweetPin

Giraffes are the tallest animals in the world. Some giraffes grow to 16 to 20 feet (5-6m) tall.

The giraffe’s height is an adaptation for feeding on leaves and twigs at the top of trees. The giraffe can reach food that other plant-eating animals cannot.

Giraffes live in woodlands or on savannahs in Africa. A savannah is a tropical grassland. When grazing on the exposed grassland of a savannah, the giraffe’s height allows it to see great distances. Giraffes have excellent vision. They have the greatest range of vision of any land animal.

When a giraffe spots a predator or danger, it can gallop away at speeds up to 34 miles per hour (56kdh). Giraffes can also protect themselves by striking out with their front hooves which are the size of a dinner plate or swinging their heads like clubs. Lions are among the predators that attack giraffes. Other predators include hyenas and leopards

To eat grass and drink water, a giraffe can splay its front legs wide apart so that its head can reach the ground. When giraffes rest or sleep they can bend down and tuck their legs beneath their body. A giraffe will rest its head on its hindquarters.

Giraffes have patterned coats. No two giraffes share the same pattern. There are nine subspecies of giraffe. Each species has a different coat pattern. The reticulated giraffe has evenly shaped spots. The Masai giraffe has irregular spots with jagged edges. The Thornicroft giraffe has a mix of even and uneven spots.

The giraffes’ scientific name is Giraffa. 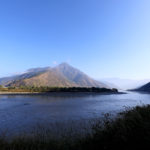 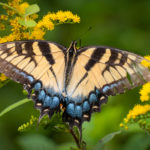