The flamingo is one of the world’s most recognizable birds. It has extremely long legs and neck and bright-pink feathers. It is quite often seen balancing on one leg.

Flamingos are found in a wide variety of fresh and salt water habitats in the tropics and subtropics. Flamingos tend to congregate in mudflats and shallow lagoons and estuaries along the coast and lakes.

The flamingo is a bottom-feeding bird. It stands in shallow water and bends its head down until its bill is upside down in the water. It kicks with its feet stirring up algae and small water creatures to eat. By opening its bill only slightly, a flamingo can filter its food trapping exactly what it wants to eat.

Flamingos vary in color from bright pink to pale pink. A flamingo’s feathers take on their pink shade due to color pigment in their food.

Flamingos are among the most social birds. They live in colonies sometimes numbering thousands of birds. They will often lift their wings or turn their heads in unison. The members of a colony will mate and lay their eggs at the same time.

Scientific studies suggest that flamingos stand on one leg partly to keep warm. When a flamingo tucks one leg up against its body, it can save heat that would be lost if both legs were in the water.

An adult flamingo is about 5 feet (1.5m) tall with a wingspan of 5½ feet. Flamingos must run to take flight. Their long legs and light bodies allow for quick takeoff. Once airborne they can fly long distances–up to 300 miles at a time. They often fly at night in large flocks.

There are several flamingo species. The greater flamingo is the largest flamingo. It is found in Central America, South America, the Caribbean, southwest Europe, Asia, and Africa. The lesser flamingos, smaller in stature than the greater flamingo, are the most numerous. They are found in west, central, and southern Africa.

Flamingos live about 20 to 30 years in the wild, longer in captivity. The scientific name of the flamingo is Phoenicopterus. 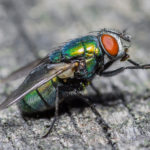 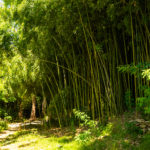