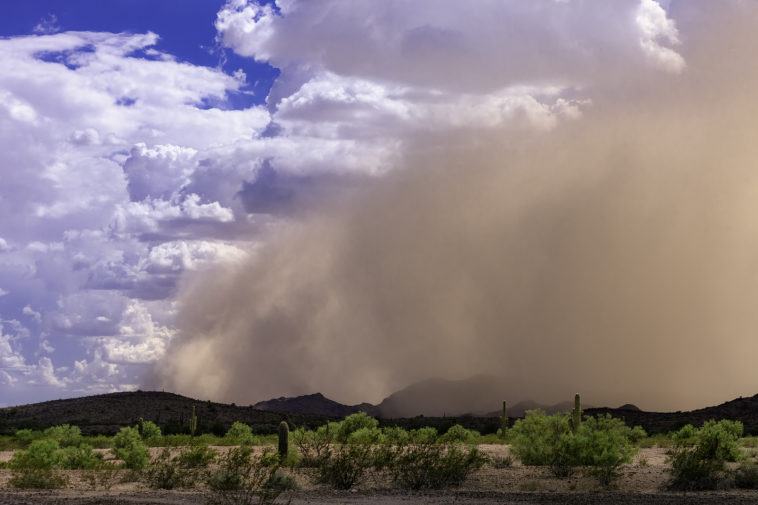 The leading edge of a dust storm, also called haboob. This storm was in Arizona.
FacebookTweetPin

Dust storms—also called sandstorms—are extreme weather events. Dust storms happen when a strong wind blows over loose sand or soil. In most cases, dry conditions cause dust, soil, or sand to be lifted into the air with the wind.

Saltation is the name geologists give to the process of dust or sand being lifted by the wind, blowing through the air, and then set back down to earth.

Dust storms happen all over the world. Most occur in the Middle East or North Africa. However, dust storms can also occur almost anywhere including the United States, particularly in the American Southwest.

The name dust storm or sandstorm refers to the types of particles flying through the air. Sandstorm is more common in areas where sand is prevalent, as the Sahara Desert. Dust storm describes finer particles and is usually used when referring to storms in urban areas, like Phoenix, Arizona.

Dust storms and sandstorms usually arrive suddenly, in advance of a larger storm, often thunderstorms. The wind carries a wall of dust and debris. A dust storm can be miles long, and thousands of feet high. These storms can last as little as a few minutes or as long as a few days. A large dust storm can displace millions of tons of earth.

The extent of a dust storm depends on both the strength of the wind and the weight of the materials being blown along. Wind gusts often exceed 50 mph (80 kph). At that speed, sand and dust can be blown through the air as high as 20,000 feet (6,100 m).

Some dust storms are caused by cold fronts, cold air pushing under warm air rapidly. In the 1930s, a large region of the United States was engulfed in severe dust storms. For several years, dust storms turned parts of Oklahoma, Texas, Kansas, Nebraska, and Missouri dark with high winds and dense swirls of dust and sand. These dust storms were called “black blizzards.”

Common in desert areas, like Sudan or Arizona, a haboob forms when warm, moist air rises at the same time that an updraft is cooled by evaporating rain. A powerful downdraft, led by a gust, kicks up so much dust that it looks like a “wall,” spreading over a larger area than the storm that follows.

A haboob is more common during summer. This is because extreme heat causes the air over the desert to become unstable. Wind from the middle troposphere—the atmospheric layer where nearly all weather originates—is pushed to the surface, where it produces even stronger winds. 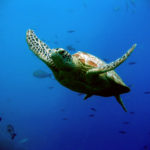 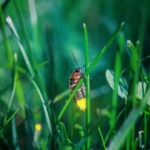