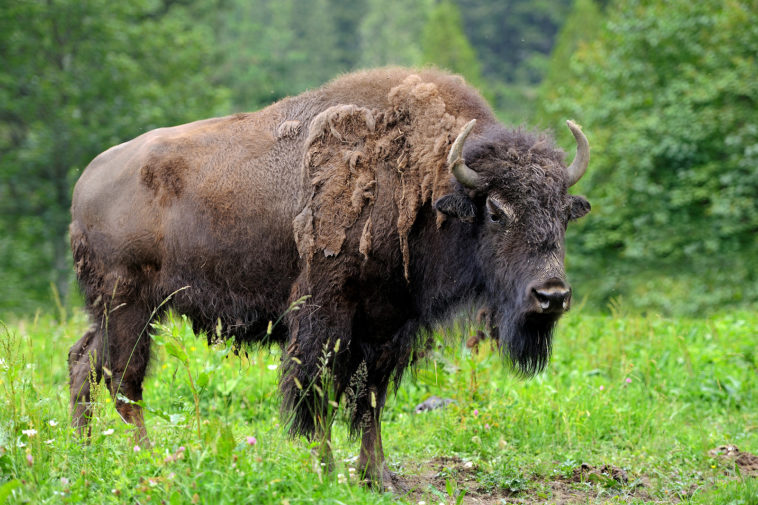 The American bison stands 6.5 feet tall at the shoulder.
FacebookTweetPin

The American bison is also known as the American buffalo. Two hundred years ago buffalo roamed the central American prairies from Canada to Texas by the millions. Now, there are only about 30,000 free-ranging bison and a total of about 500,000 including those held in captive herds. Biologists believe no other species on Earth has declined so quickly.

The American bison is a massive creature. It is the heaviest land animal in North America. It has a strong, sturdy body and pointed horns that turn out from the side of its head. It has a distinctive hump on its back and long shaggy brown hair. A full-grown male American buffalo weighs between 2,100 and 2,200 pounds (950-1,000 kg), is 7 to 12 feet (2,1-3.5m) long, and stands 6.5 feet (2 m) tall at the shoulder. Female bison are about half the size of males.

American bison are found in prairies and woodlands. They are grazing animals, eating grasses and sedges (wetland plants). Much of the vast grassland territory of the American prairies where bison once roamed have now been replaced by farms and homes. During the 19th century, it is estimated that 50 million bison were killed for food, hides, sport, and as a way to disturb the Native American way of life as settlers moved West into their territory.

American bison spend most of their time grazing and browsing in loose groups and chewing their cud. Bison are not territorial, they roam about in grassland and open woodlands in search of food. Their movement or migration is usually dictated by the seasons and changes in the food supply. They usually migrate to snow-free areas in winter, but their long hair insulates them from winter cold and they can paw aside snow to reveal grass below if necessary.

Adult females and their young live in groups of 10 to 60, led by a dominant female. Male commonly live apart in groups and only join females during the mating season in late summer, Male bison will fight each other for the females by ramming each other head-on. After mating a male will guard his mate for several days to prevent other males from mating with her. Calves are born in spring after a gestation period of 9.5 months. Bison calves can stand up to drink their mother’s milk within 30 minutes of being born.

American bison are hunted by gray wolves, grizzly bears, and coyotes. Bison have a well-developed sense of smell and hearing. They can run as fast as 37 miles per hour (60 kph) and they can easily swim rivers more than a half-mile (1 km) wide.

The average lifespan of the American bison is 10 to 20 years, some live longer. The scientific name of the American bison is Bison bison. Some of the bison found in Canada are a separate subspecies known as wood bison (B. bison athabascae). Wild bison are also found in the Bialoweza Forest on the Poland-Belarus border and they belong to a another species called the European bison, or wisent (B. bonasus). 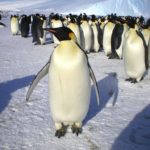